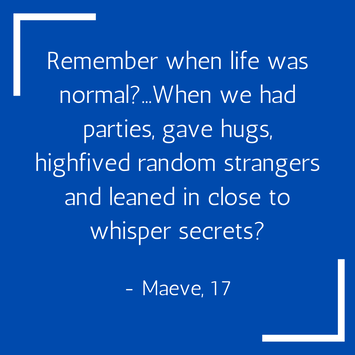 I suppose that life will be going back to normal soon, won’t it? That everything will go back to the way it used to be, forever ago?
Except that’s the problem, isn’t it. Everyone has forgotten normal.

Remember when we would get a ride home after school with your neighbors, or else bike our way back up the hill in the sunshine, and everyday I would sit at your kitchen counter and tell you stories about my day?
Me neither. I haven’t been inside your house in what feels like forever.

Remember when the three of us would stay after school, and in those glorious minutes between class and the musical, we would run up and down and all around, until that building felt more familiar at times than our own homes? Remember how I would always bring the snacks, and she would always bring the music, and together we would sit, holding each other, in the now abandoned, sun soaked hallways, drifting through those secret minutes like motes of dust in a forgotten ray of sunshine?
Me neither. I haven’t hugged you in what feels like forever.

Remember when we would spend hours debating matters of morality and science, inventing and defending our claims as we spoke them, backtracking and rewording and talking ourselves in circles? Questioning the whole world and making ourselves feel so insignificant it was sometimes a relief to get back to the mundanity of simply surviving?
Me neither. I’ve been thinking about the meaning of life for what feels like forever.

Remember when you left for a month to go be in a bubble with your family friends - or was it your cousins? - and I was left, spending endless hours by the river, reading my books and painting and drawing in the hot sun, waiting for your return?
Me neither. I haven’t traveled anywhere in what feels like forever.

Remember when we would visit your house for the holidays, and you would make a meal so large and wide that for hours afterwards everyone would sit around the table, bellies too full to do anything else, and talk? But the little ones of course would have energy anew, and you and I would go to entertain them, reading them same story over and over hundreds of times until we were sure the pages would simply crumble in our hands from over-use?
Me neither. We haven’t been all together like that in what feels like forever.

Remember when life was normal? When people wearing masks on their faces were creepy or just downright odd? When we had parties, gave hugs, highfived random strangers and leaned in close to whisper secrets? When we tumbled in piles on the floors of our rooms, and ran holding hands down the bike path? When we snuggled in by the fire and shared a cup of cocoa, when we had spitting contests and put our hands to our faces, when we looked around us and saw more than just eyes?
Me neither. It’s been what feels like forever since life was normal.
Ruth E. (Thayer) Leahey
"Reflections" 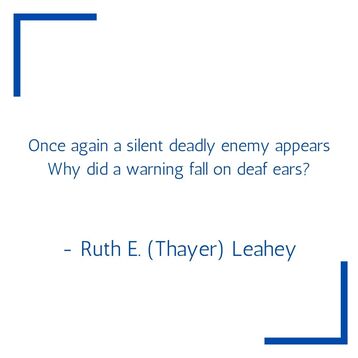 Little did we know what laid in store for us.
Our youthful president gunned down in the fall.
His death and days to follow held us in sadness.
His message inviting; have you answered the call?

Masses of people marched for their natural right.
In ’65 we sat pondering that blackened night.
Medicare designed to help others on 1 of July.
And now the till is empty, some will cry.

The USS Pueblo was sent to the Sea of Japan
Seized and later released 82 and one man
Unrest and political turmoil takes 2 more;
A black and a white, an even score.

We saw the first man on the moon, Neil Armstrong.
In his path we knew a woman would follow, not too long.
An educational venture turned mistake.
Six and one would their last trip take.

A multitude of young men sent to a foreign land
To fight a different kind of war, not hand to hand.
This followed “the one great fight”
Many of them returned on a different flight.

Colleges become scenes of protest and four die.
Of the Manson family violence we wonder why.
We lowered the voting age to eighteen
And a presidential visit to Moscow we have seen.

Break ins at the capitol reveal and declare
That Washington’s closets were not bare.
Tapes and other material present a state of unrest.
Our vice president resigns and pleads no contest.

Impeachment of the top man tears the country more
But on the Bicentennial 4th, the flag did sore.
Legionnaires’ disease emerged as a mystery ailment
And the nation suffered its first nuclear accident.

Hair, living styles, fashions were to change.
The woman would recede from the range.
An Englishman was laid to rest.
While two months later, our leader was shot in the chest.

Surgical implants invented have lengthened life.
The oil crunch brought the country much strife.
We have travelled afar, above and below
Our future still remains with us, you know.

While advancement in life sustains
Viruses run rampant through our veins.
Life styles expanded “I Want to Hold your Hand”.
Now death moves slowly through our land.

Our America, proud America our nobly born
Help collect our lives that are torn.
Before skeletons alone remain.
To guard the precious land the pioneers help claim.

We could turn our thoughts from the land
But it’d be only a temporary thing.
Reality will knock on our door with its hand.
I wonder, has “Knowledge is Power” lost its sting?

Once again a silent deadly enemy appears
Why did a warning fall on deaf ears?
Was there no Paul Revere to give a warning?
Obituary lists grow longer each morning.

Our schools, churches and workplaces are vacant.
To estimate the number of deaths, I can’t.
Stand 6 feet apart all of us is a must.
To end this “war” soon, in God we trust.
Tom Weiner 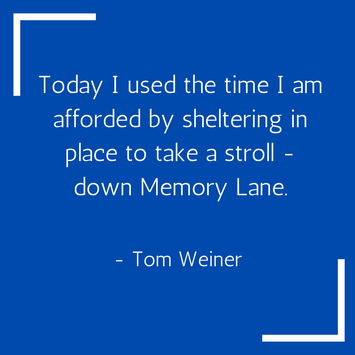 Today I used the time I am afforded by sheltering in place to take a stroll - down Memory Lane.

I went through a night table drawer I haven’t visited in a good 20 years and found so many treasures including many old birthday, anniversary, Valentine’s Day cards expressing warmth and love from my wife, children and friends.  I came upon tributes from former students and their parents.  I remembered many and felt their appreciation for the role that was for 40 years my life’s work.

Another treat was photos of my children when they were….children, since they are now all grown up and 2 of the 4 with children of their own.

Some I lingered over - rereading old letters, some from friends who are no longer part of my life, but who once were central - another reminder of life’s transiency as well as the capacity we each have to love and be loved by so many folks.

Then there was this article from the Amherst Bulletin of May, 1984, which I had completely forgotten about and which I have just sent to Russell Vernon-Jones with whom I shared the spotlight as fathers who were determined to be nurturing. 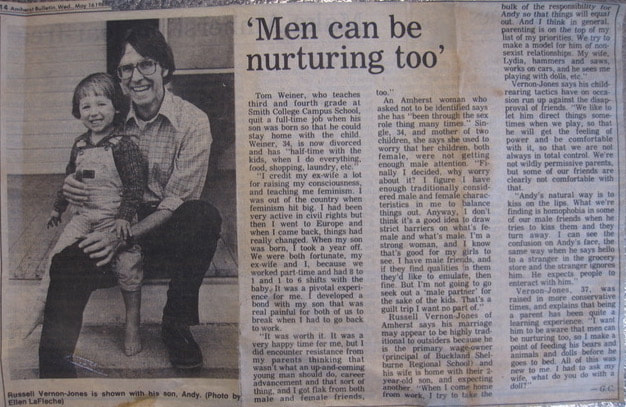 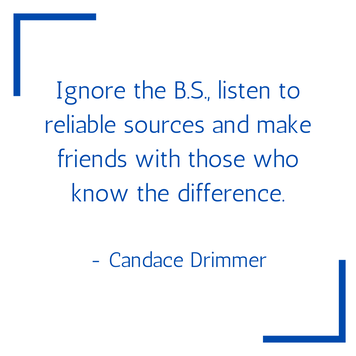 ​Everything I ever learned during my 20 years living abroad…has prepared me for this moment of time.

First, there will be shortages.

In Guayaquil, Ecuador the big, air-conditioned grocery store had one freezer section, about the size of the average convenience store’s two-door refrigerated drink cooler. Despite not having any frozen food for sale, the freezer was always plugged in. As for the variety of fresh produce, it ranged from potatoes to onions, no green vegetable in sight.

In Willemstad, Curacao not-too-fresh broccoli was prominently displayed at the large grocer I frequented. By the time I heard there was broccoli, it was brown. To play the vegetable lottery, I went to Rudy’s next door. Hit and miss, it mostly was a miss. On a trip to Houston for my elementary school daughter and I to see an allergy doctor (there were no allergy doctors on the island), I saw fresh sweet corn. Buying a dozen, I indulged in microwaved corn for breakfast for the next 3 days. Heaven.

Second, it will feel scary outside of home.

In Guayaquil, there was dengue, pinworms, rabies or the potential of rabies when a pet monkey bit our 7-year-old, a monkey that the owners swore had its rabies inoculations. Also there was impetigo, gastroenteritis and head lice (body lice I’d already experienced sleeping at a relative’s home in Vermont).

Snakes and rats frolicked in our  jungle-like garden, iguanas longer than I am tall, chilled out at the bottom of our rented home’s leaking pool. Even more rats ran about in the streets day and night, coming out of the toilets at our kids school and our toilet at home.

As for medical care, it was always a crap shoot…In Guayaquil, the best pediatric clinic in the city was BYON (bring your own needles), that is if you wanted to ensure it was unused. The day the nurse overdosed our daughter by 10X the dosage of her allergy shot was the day learned how to give her allergy shots.

Third, there will be rumors and propaganda.

Ignore the B.S., listen to reliable sources and make friends with those who know the difference. Good advice on the day that the President of Ecuador was kidnapped by the head of the Air Force.
…

Fifth, have friends who are there for you.

Like Sylvia, who taught me how to keep the rat that came into our home via the toilet to not do that again….And then there was my skinny dipping Kiwi RN who talked me through our daughter’s cosh to her head when she slipped on tile in Asuncion, Paraguay.

Today in the days of coronavirus, Village Hill in Northampton has my back. One neighbor offered me eggs to make my husband’s birthday cheesecake when our grocery delivery hadn’t come leaving the cupboard bare. Another pair of neighbors shared their homemade masks for us, and our son’s wife and son in Brooklyn.

So is there any wonder why I share my Katherine Hepburn brownies with my neighbors?
(Recipe available on the New York Times cooking site.)
Judy Denison 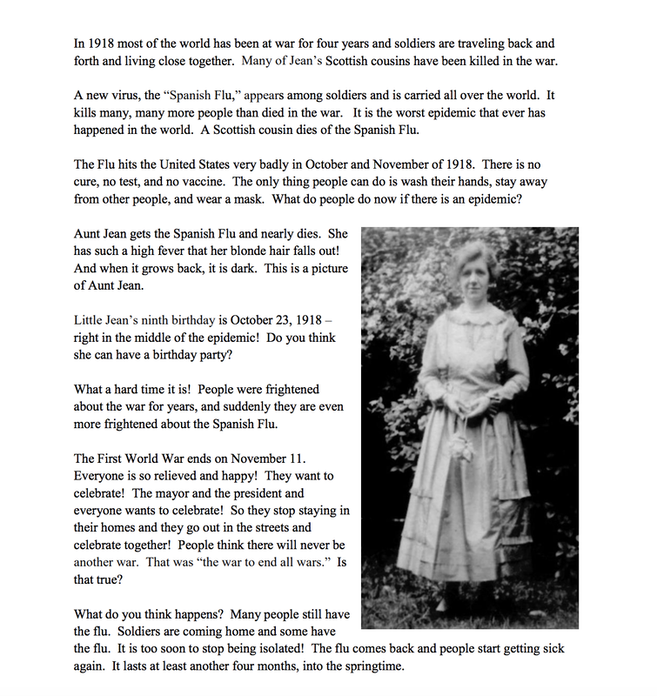 ​…a little children’s book, which I’d like to be shared freely.  It’s for children who are being isolated right now due to coronavirus.

Click here for full download.
Throughout this page and others, we will be posting haiku submitted to the Montview Neighborhood Listserv.
​down in basement depths
that long dreamt of art project
may emerge at last
-Mac Everett