HISTORIC NORTHAMPTON
Made on Main, and Made Again in Florence
A reproduction of the Sarah Strong Chest by master furniture maker Sharon Mehrman 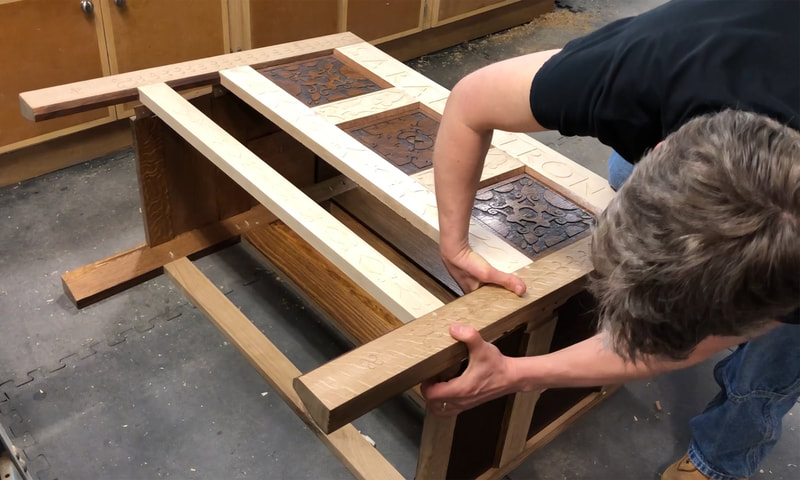 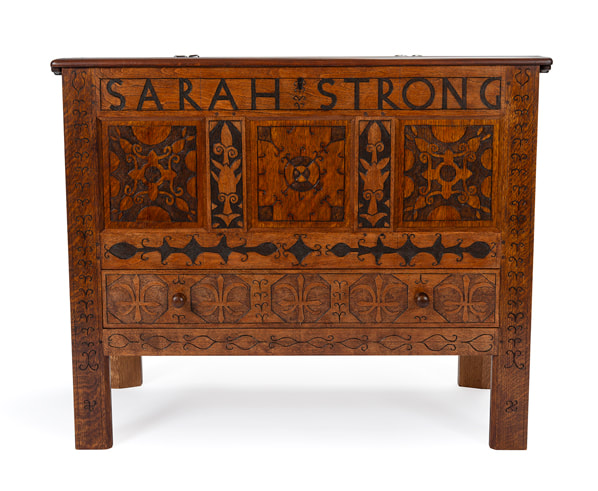 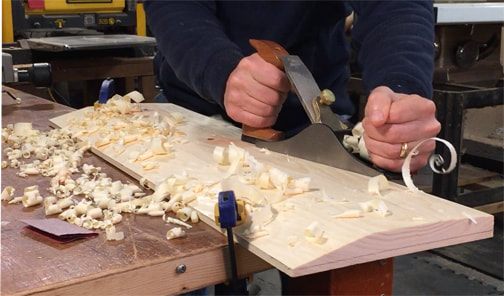 silver. Textiles were expensive because they were so time consuming to make.  Women had few rights once married, so her name, carved on the chest, meant something.  In the patriarchal system of the 17th and 18th century, a husband legally owned all his wife’s possessions, though it was culturally accepted that a woman owned the movable property (like a chest and linens) that she brought into the marriage.  Sarah’s name protected her goods and ensured an inheritance for generations of women.
In an interview with the Daily Hampshire Gazette, Mehrman says making the reproduction chest was both fascinating and challenging – and she learned a lot along the way. She began by doing an in-depth study of the chest, of which there are only about 135 known to have survived.  Of those, only six have a woman’s full name carved on them. These chests were typically monogrammed, so the fact that Sarah Strong’s full name is on it is a bold statement of ownership at the time when women did not legally own property.  “The original chest is one of those pieces of furniture that is really special,” Mehrman said.  “Making the reproduction married the two loves I have of history and woodworking, and I was really intrigued and excited about the insights into the original I gained by making the chest.”
Some early American woodworking techniques were very different from modern ones, especially for measuring and layout, she said.  Mehrman used hand tools similar to those of the original artisans.  On the original she saw plenty of evidence of tool marks: planes, chisels, scratch awls, dividers, etc., all of which help tell the story of how it was made.  Her study and her work also demonstrated that the Strong chest was made by several people working on it at once – while Mehrman worked alone.  “It took me a lot longer than it probably took them,” she said.  “They weren’t fussy, they were making them fast,” she said.  Even so, the chest was executed to a very high of skill, she said.
At every step, she said, she learned something new.  “I wanted to reproduce the chest as closely as I could.  The challenge was that every time I gained a new insight, I had to look deeper.”  An example of that was her discovery about how the original chest was constructed. The joinery on the front is different from the rest of the chest – there are angled joints that are difficult to cut out of oak.
In addition to making the reproduction chest, Mehrman also videotaped and photographed the process, and Making it on Main Street will include short videos with Mehrman’s commentary. “I think people will get a sense of not only my insights from making it but also about the process of hand-crafting furniture."  Mehrman was quick to say how much the project meant to her. “For me this was bringing together my work and my love of museums and places that tell our history, especially local history,” she said.

Adapted from an article by Rachel Simpson the Daily Hampshire Gazette in the Gazette sponsored supplement,
Making it on Main Street: 400 Years of History, June 20, 2019.