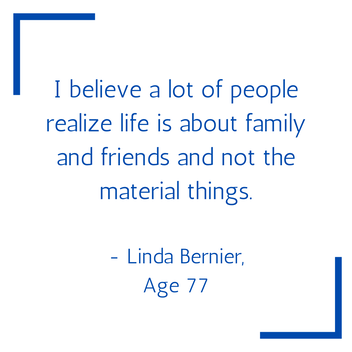 Life as we know it came to a screeching halt when Covid-19 came into our lives. For now I am so appreciative of my family. I keep in touch by phone and look forward to getting outside to work in the gardens. Right now I am keeping busy raking and doing a lot of cleaning in the house. I do visit a few neighbors,but outside and we observe the 6 foot rule. Have a great family that insists on doing my shopping, because of their concerns about me. I believe a lot of people realize life is about family and friends and not the material things. It is such a joy to see people contacting each other, where as before life was so hectic. Now I know what is important, family, friends and just ordinary people we happen to meet. I believe this is a wake up call for everyone. I do worry about my son who is an EMT and my son-in-law who has to work as well. Worry about my daughter who has a heart condition and suddenly has to care for a 9 year old and a 2 year old and have been very proud of how she handles the children. They live in town but I can't visit them. Just trying to be hopeful that this will get better and everyone can get back to normal.
​Throughout this page and others, we will be posting haiku submitted to the Montview Neighborhood Listserv.
Peter Weitzman
Jonathan Kahane 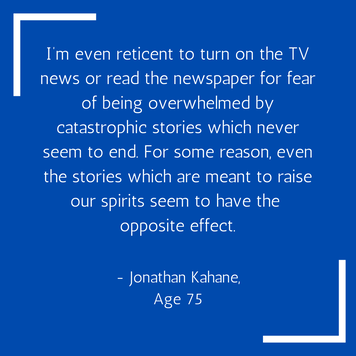 ​The other day, one of my millennial sons exclaimed to me that this coronavirus outbreak is the most harrowing experience of his lifetime to date. He asked if that were true for me as well?

It didn’t take me long to say, “No.” I told him that for me, the Vietnam War caused more anxiety, domestic angst, and personal distress — at least up to now. Not having been alive during World War II and the Holocaust, nor during the Spanish flu pandemic of 1918, I could not consider those periods as positive answers to his specific question.

I must confess, however, that just hearing stories from my parents and their friends and from reading books about these and other disasters that human beings have endured, I’m sure that those who had lived through their respective horrors suffered a great deal as well.

Day after day I read in the newspapers and hear on TV about this ongoing and growing crisis that threatens our country and the world. I am told repeatedly that I belong to the most vulnerable group on several counts — age, preexisting condition, recent travel history, geographical area, etc. — and that I should be careful, prudent and vigilant,  whatever that means.

If I took all the advice that is being slung at me from various “experts” around the globe, I would have to look for an old 1950s-era nuclear bomb shelter and hunker down in there for a year, maybe two. I actually heard that some of these are being refurbished now and being sold for millions of dollars — location, location, location.

The old saying goes that, “Every cloud has a silver lining.” I have lately found myself being able to find time to catch up on chores and projects around the house as well as being able to read a few books that have been piling up next to my reading chair. I have also been able to find more time to just be able to sit back, think and clear my mind in order to let random thoughts come flying by....

… I, like many others, am experiencing fears and anxiety that I never could even imagine. I find myself afraid of going to the grocery store or even to the doctor for unrelated issues to the virus. I am a member of several cohorts that place me in higher risk categories such as age, recent traveler to Europe, living alone, cancer survivor, ...  I’m even reticent to turn on the TV news or read the newspaper for fear of being overwhelmed by catastrophic stories which never seem to end. For some reason, even the stories which are meant to raise our spirits seem to have the opposite effect  Perhaps the biggest repercussion I am feeling from this horendous event is that I am unable to even visit my children. I am constantly anxious about their wellbeing. My oldest son is an ENT surgeon in Las Vegas and is on the front lines every day. My youngest son is in Seattle where he is a rocket scientist for SpaceX. Elon Musk made them go into work while every other business there has either shut its doors or had their employees work from home. Mr. Musk called this virus “dumb.”  He’s considered a genius? 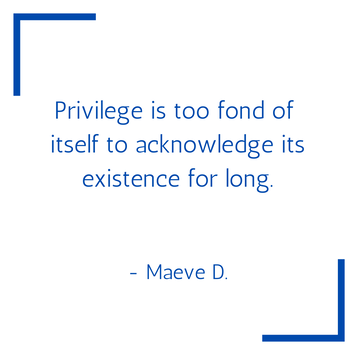 It may sound strange, but until this moment, she hadn’t quite realised how out of the ordinary this situation really was.
​
It wasn’t that she was unaware of what was transpiring in the world around her; quite the opposite in fact. It was rather hard to miss after all: schools closed, no one at work, everyone isolated and stories of people dying by the thousands. It was just that it hadn’t really sunk in. Not fully. Not yet.

The problem, she supposed, was her family.

When she was 12 they had moved to New Zealand for a year and a half: halfway around the world for a “learning experience” and “an adventure” and “a new start”. By necessity forced to spend copious amounts of time in one another’s company, they had shifted, their family dynamic morphing into something bearable, if not downright enjoyable at times. When comparing her family to others’, she noted with interest the differences: in the way she felt about her brother, in the way she debated with her parents about issues of morality and science late into the night, and in the way no one ever raised their voice above the level of civilised conversation, except to laugh or sing.

And this was the heart of the problem, she felt. She was so used to this routine, so used to hours spent alone or deep in a book, so used to playing cards or hiking all day, and so used to the fact of no one requiring her attention other than those immediately around her that the full force of the situation simply washed over her, yet another wave leaving the beach untouched.

She stared, shocked, at the line of people stretching away from the Stop ‘n Shop like ants, spread thin across the blacktop. Every person six feet away from the next. Every person wearing a mask and gloves. Every person with a look of distrust and fear in their eyes so intense that she almost turned tail and ran: “Oh, I think my mask is broken, I’ll just wait in the car.” “I’m not feeling too good, can I wait outside?” “Actually, why don’t I go get gas? You wait here in line.”
But she didn’t run. She lifted her chin and looked reality straight in the eyes and squared her shoulders. So be it, she thought, searching the blacktop for the end of the seemingly infinite line. Infinity, as it turns out, ended around the corner and down the street a bit, with an elderly woman so bundled up only her eyes were visible, staring out with fear and hatred at anyone who dared approach. The woman muttered to herself and wrapped yet another scarf around her face.

She kept a safe distance away, every nerve in her body tingling as the gravity of the situation hit her hard, all at once, the wave crashing on her with all the force of nature, unchecked.

Empty streets, people huddled alone in their apartments, shaking with fear or fever, or maybe both. An employee at a home for the elderly, slowly zipping up yet another of those big black bags, a motion that has become so familiar that they could do it with their eyes closed. A funeral, cut short by a faulty internet connection and the rain, each mourner left to return to their thoughts again and again in silence.

She saw a million images at once, and understood them all. She felt the pain of a thousand deaths and a hundred thousand lonely people, saw the insanity of isolation and the terror of touch, and she cursed herself for not seeing it sooner, for not coming out of her shell for one second and really seeing the life that was unfolding around her.

She wept at her ignorance.

And later that day she returned, arms full of groceries, to her house. And she picked up a book, and lost herself in that other world, secure in the knowledge that she was safe, used to the monotony of her family and her life, content and happy and smiling in her little purple home.

Privilege is too fond of itself to acknowledge its existence for long.
Rosetta Murray 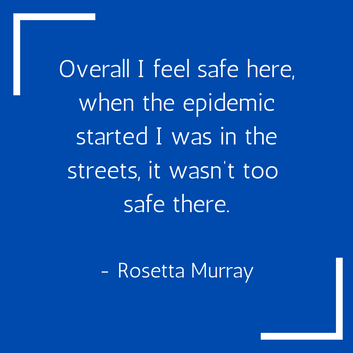 ​I’m feeling very depressed because of the epidemic, a lot of people are dying from it. Life was good before the epidemic came out. It’s been real good here. The people [at the shelter] is caring, it’s a safe place to be. They meet your needs, they provide food shelter, warmth, food, clothing if need be. Overall I feel safe here, when the epidemic started I was in the streets, it wasn’t too safe there. I learned through the crisis, I wanted to go to the hospital but they told me about this place, and I’m happy to be here. It’s bad, killing a lot of people. ​
Anonymous 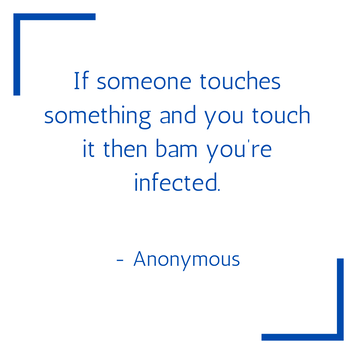 ​I feel like it's being stressful, being scared of going to the grocery store, I’m scared of the germs, feel like I’m becoming a germaphobe. Since like people get the virus and not have any symptoms that makes it more troublesome and stressful. If someone touches something and you touch it then bam you’re infected. Just like the precautions, and I feel like it will instill in people and people will be extra careful and stuff. I feel like I’m doing my part, by like cleaning my hands and my mask, always using hand sanitizer. Basically if it wasn’t for the coronavirus, I wouldn’t have a job [at the shelter] right now, but that’s not a plus or anything.
Historic Northampton