HISTORIC NORTHAMPTON
The Howes Brothers Photographers
By 1888, Alvah opened a portrait studio in Turners Falls.  From 1888 to 1894, Walter and a neighbor from Ashfield, Harry Sturtevant, traveled on the roads, taking turns as the photographer, while a third person, either George Howes or “a Ranney boy” from Ashfield, drove the photographers’ wagon and ran errands.  Alvah remained in Ashfield, developing finished prints from his studio.  By 1894, Alvah closed his studio due to a decline in business after the economic depression of 1893 and returned to touring on the road, this time as A.W. and G.E. Howes Photographers.
On the backside of the card was the photographer’s logo with a negative number for reorders: “A. W. Howes & Co., Photographers, Turners Falls, Mass.  Parties wanting more Photographs like this, please send number marked on this card.  Be sure to give the number right.”
In 1903, Walter and George purchased a cousin’s interest in a Florence trucking firm and eventually operated the Howes Brick Company in Northampton and Florence.  Alvah returned to Ashfield in 1903, working there as commercial photographer until 1907.  He ran a small dairy farm in Ashfield, worked as the town’s lamplighter and helped maintain Ashfield’s cemeteries.  Alvah Howes died on November 25, 1919.  George Howes passed away on January 13, 1925. Walter Howes outlived both brothers, passing away on January 6, 1945. 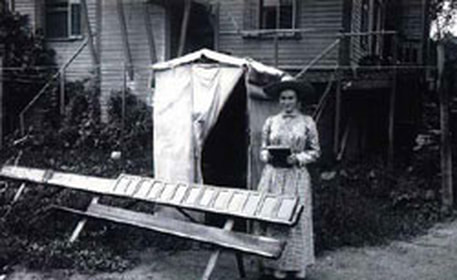 Despite two decades of photographic work, no formal effort to preserve the photographic prints or negatives was undertaken when the brothers changed careers in the first years of the 20th century.  In the early 1960s, the Zachariah Field Tavern, the last studio-residence of Alvah Howes, was put up for sale.  Stored in the attic were wooden crates containing glass negatives. The owners soon donated them to the Ashfield Historical Society.  Another Ashfield resident donated a set of glass negatives that had come into their possession.  The daughter of Howes assistant Ethel Bates donated numerous photographic prints.  To preserve and interpret the Howes Brothers work, the Ashfield Historical Society undertook the Howes Brothers Photographic Preservation Project.  The project resulted in climate-controlled, fire-proof storage of the negatives and prints, a full catalog of their work, exhibitions and the publication of the book, New England Reflections 1882-1907: Photographs by the Howes Brothers.  Curator Norma Harris and researcher Theodore Hendrick spent decades researching and cataloguing the prints, identifying the sites by street address.  In the 1970s, the Ashfield Historical Society donated to Historic Northampton 738 glass-plate negatives taken by the Howes Brothers of Northampton, Florence and Leeds.
References:
Matthews, Richard, "Through the Eyes of the Howes Brothers," Hampshire Life, Daily Hampshire Gazette, July 24, 1992.