In January 2016, Historic Northampton was awarded a $25,000 membership challenge grant from an anonymous donor.   The grant was awarded through the Community Foundation of Western Massachusetts.

In 2015, this anonymous benefactor challenged the museum to raise $25,000 in new or returning memberships by December 31, 2015.  Over 260 new members joined over 60 returning members to meet this challenge.  Thanks to each and every member - and to our anonymous donor - Historic Northampton is 500 members strong. 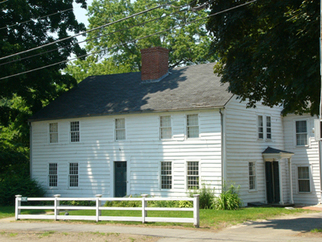 The Parsons House, 1719
In order to meet this challenge, Historic Northampton is launching a major membership drive with a direct mail campaign to residents of Northampton.  The board will also encourage new members to join at programs and community events.  As part of the preparation for this drive, the museum has rebuilt its website to create a more modern look, to make it easier to update and to simplify the membership process.

The goal, according to Acting Director Nancy Rexford, is to replace the sources of transitional support that have helped turn the organization around in recent months with renewable memberships on which it can rely for operating support in future years.

The transitional support has included several important grants and substantial donations. The Community Preservation Committee awarded Historic Northampton over $176,000 to stabilize the 1719 Parsons House, to remove asbestos and mold in Shepherd House, and to repair over a hundred windows. $7000 from the Parsons Family Association helped replace an ancient and inefficient boiler, and $5000 from the Beveridge Family Foundation will provide dehumidifiers to stabilize the newly-cleaned basements and collection storage areas in all three houses.
Operating support this year has included a $20,000 grant from the William G. Pomeroy Foundation, substantial anonymous gifts and increased member donations. Thanks to this timely assistance, Historic Northampton expects to balance its operating budget using operating revenue for the first time since 1997. The organization has no debt and owns all its properties outright.

Thank you for your support of Historic Northampton.