HISTORIC NORTHAMPTON
Thank you for your online contribution
Your donation was successfully processed. 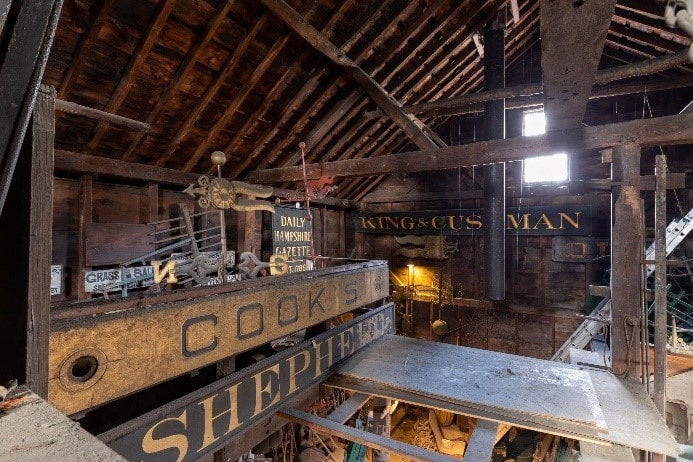 View of the loft of the Shepherd Barn.
Photograph by Paul Shoul, who photographed the barn
in March 2020 prior to the start of the project.
Thanks to major funding from Northampton's Community Preservation Committee, Historic Northampton has begun a project to restore the Shepherd Barn.  Before we can restore the barn, we must unravel the mysteries of its history.
The Barn Mystery: Preliminary Findings by Master Timber Framer Jack Sobon

Since Jack’s discovery, we’ve been busy researching the property’s past ownership and use for clues about what the building might have been used for and by whom. Was it a craftsman’s space? Why was it divided? And when was it converted into a barn?

For the whole story, with drawings and photographs, read Jack Sobon’s preliminary report.  If you know of a building as described in the report, please email Elizabeth Sharpe.
Jack Sobon's Preliminary Report
How Old is the Barn: Dendrochronology by Bill Flynt
Removing the Contents of the Barn and Rehousing Artifacts
The barn holds an amazing collection of artifacts from farms, homes and public buildings, including: weathervanes, shop signs, toolboxes, a flax break, a scythe, a logging sled, sleighs, and bathtubs.  Sharon Mehrman and volunteers are inventorying, cleaning, photographing and rehousing the artifacts. Sharon is a fine furniture maker and a 2019 graduate of the UMass/Amherst Public History Program. Last August, she was a Winterthur Fellow, researching 19th-century technology and woodworking.

Once the barn is empty, timber framer Alicia Spence will take up the floorboards and peel back some clapboards.  With the barn's frame exposed, she and Jack Sobon, and other historic building specialists, will look for evidence of prior configuration, repairs and modifications indicating that the building had been moved. 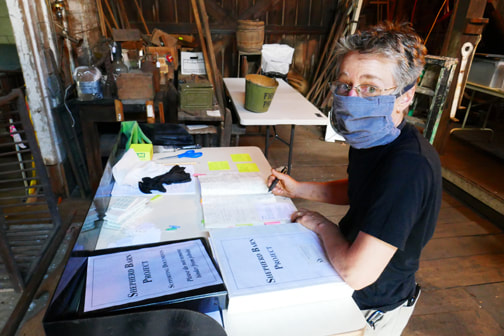 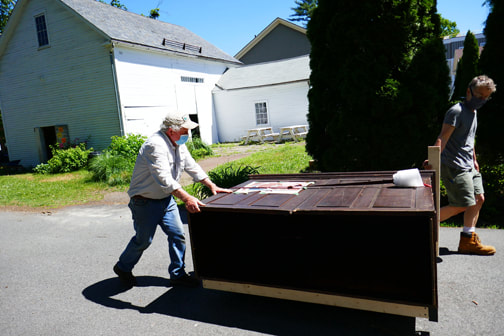 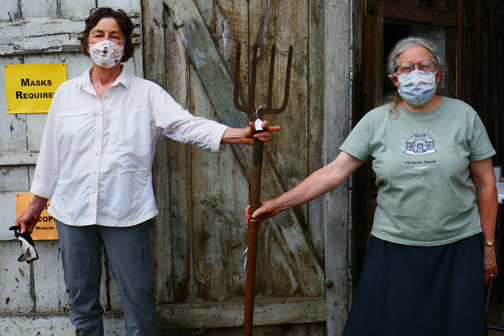 Images (left to right): Sharon Mehrman inventorying in the barn. Sharon and Fred Morrison move the 19th-century cabinet with the town’s standard weights and measures to temporary storage. Barbara Blumenthal and Debin Bruce contemplate a pitchfork.
The Shepherd Barn and Property: 1896 and 2017
Susan Lorinda Brigham Munroe Shepherd (1821-1897) purchased the Shepherd property in her own name in 1856.  Her husband Henry Shepherd (1811-1900) and son Thomas (1856-1923) were both horsemen, and the name of Thomas's horse, Br'er Fox, is still visible over the window to his stall.

The Shepherds had flower gardens and a drive between the house and the barn, and they bought the plot of land directly behind in (now the parking lot) to allow for more extensive vegetable gardening.  Thomas's letters to his wife Edith in 1916 describe growing asparagus, tomatoes and fruit trees.

Today, the children of the Bridge Street School continue the gardening tradition on the Shepherd property. Through the Sprouts program, children are learning organic methods for growing vegetables.
Bridge Street Sprouts 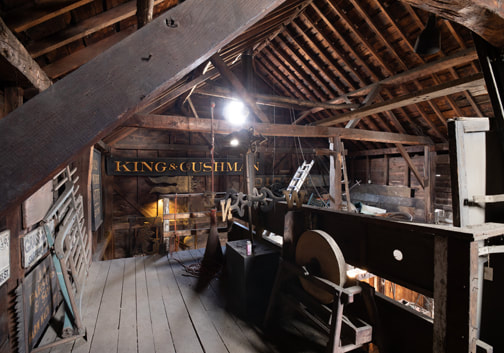 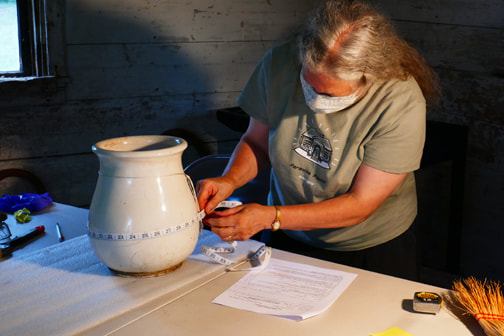 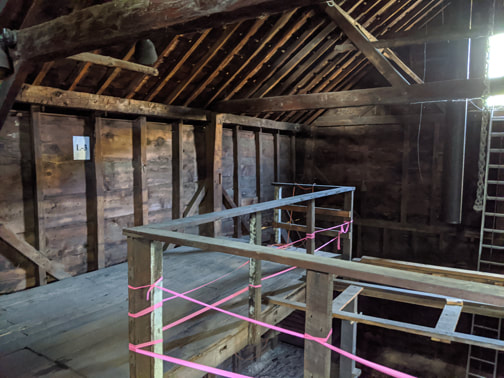