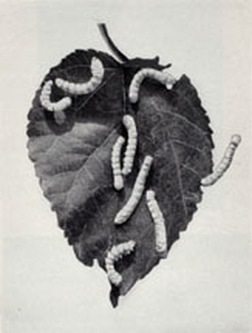 Silkworms at 18 days old
Faith Deering is a museum educator in Historic Deerfield’s Department of Museum Education.  Before coming to Deerfield, she worked at the Smithsonian’s National Museum of Natural History as an entomologist.  She is a world traveler who has been to Thailand, Senegal, Central America and Europe in search of insects. One of Faith’s strong interests is making connections between the natural world and human cultural history. From honey bees to silkworms, from shellac scale to Cochineal dye, Faith enjoys talking about the myriad roles insects play in people’s lives.

Silk, the most beautiful of all textile fibers is often called the Queen of textiles. Often thought to be delicate, silk is actually one of the strongest of all natural fibers. A single strand of silk can support many times its own weight and once it is reeled from a cocoon, silk can be spun and then woven into cloth. Silk cloth can be dyed and painted adding to its shimmering beauty.

In the early days of the local silk industry, families in Northampton were raising silkworms in their homes and growing mulberry trees so leaves could be collected to feed the hungry silkworms. 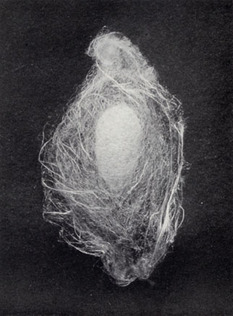 Completed Cocoon
In 1826, Daniel Stebbins grew mulberry trees on Pomeroy Terrace to feed eggs sent by missionary friends in China.  Stebbins’s wife and daughters cared for the worms and wore dresses of silk they had raised.  At Fort Hill, Samuel Whitmarsh built two long greenhouses for mulberry seedlings and a cocoonery nearby for two million silkworms.  In the mid-to-late 1830s, he purchased land in Florence, planted 25 acres of mulberry orchard and outfitted a four-story brick factory along the Mill River in Florence with machinery for silk manufacture.  In 1838, he incorporated the Northampton Silk Company, but withdrew from the company in 1840 facing bankruptcy.   The silk factory and land were taken over by the Northampton Association of Education and Industry, an abolitionist community which aimed to raise silk communally from 1842 to 1846.  Letters written by community member Almira Stetson describe her work unreeling silk cocoons: “We had 25 bushels of cocoons of the first best quality they came off very well indeed much better than we feared having so much unfavorable weather and new hands put on to feed…. “  When the community disbanded in 1846, association treasurer Samuel Hill continued the silk enterprise.  With the commercial success of machine twist thread, silk thread manufacture finally took hold in Florence, but by manufacturing end products, not by producing raw material.

Corticelli Silk Culture Cabinet
Yet sericulture in Northampton and Florence has endured.  In the early twentieth-century, Cora Loomis prepared silk culture boxes at the Corticelli Silk Company showing the life cycle of the silkworm for educational displays.  After the Corticelli Silk Company closed in 1932, Miss Loomis continued to raise silkworms as a hobby, sending cocoons and displays to teachers in all parts of the country who used them in the classroom.  At the turn of the twentieth-century, the Northampton Silk Project researched patents, recreated machinery used in the early nineteenth-century and brought silkworms into local classrooms. An experienced sericulturist, Faith is raising silkworms this summer for the history workshop Silken Threads and Shimmering Cloth at Historic Deerfield and is pleased to bring Spinning A Silken Story to Historic Northampton for a one-day program on Sunday, July 26th from 1 to 4 pm.