Table Talk: Food, Cooking, and Eating in Northampton, Then and Now

An exhibition curated by Barbara B. Blumenthal about 250 years of food history in Northampton
February 6 - May 29, 2016

Markets and Restaurants: Small food markets and restaurants are pictured in photographs
The Clever Kitchen: Kitchen Gadgets and Appliances

Food on Main Street: 1786, 1886, 1976  and 2016
Also on view is a large Plan of Main Street in Northampton, which highlights food-related businesses on Main Street in 1786, 1886, 1976, and today. The Plan reveals the shift from 18th-century inns to many late-19th-century makers and sellers of groceries, meats, bread, and even ice cream. The mid-1970s saw an influx of young entrepreneurs who fixed up neglected downtown buildings and founded businesses, some of which are still here, such as Broadside Bookshop and Fitzwilly’s Restaurant. Today there are many restaurants, including pizza parlors, Italian, Indian, Thai, Japanese, Chinese, and many other cuisines.
The Clapp Family - One Northampton Family's Food Business
About the Curator 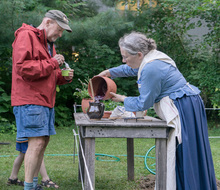 Table Talk was curated by Barbara B. Blumenthal, a member of Historic Northampton’s Board of Trustees.  Barbara was a museum guide and hearth cook at Historic Northampton in the 1980s and early 1990s. Her passion for local history and food history led her to poke around in our collections looking for tasty tidbits to share with the public.  She has assembled in her exhibition, Table Talk, an eclectic array of documents, photographs, and objects which illustrate the rich history of food markets, restaurants, cooking, and eating in Northampton. Barbara is the Rare Book Specialist in the Mortimer Rare Book Room at Smith College.   In 2010, she curated the exhibition at Smith College, ﻿Cabinet of Culinary Curiosities﻿.  ﻿﻿At left, Barbara is serving hot blueberry sauce which she prepared over an open fire at the Historic Northampton Ice Cream Social in 2014. ﻿