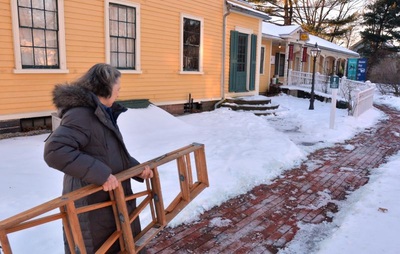 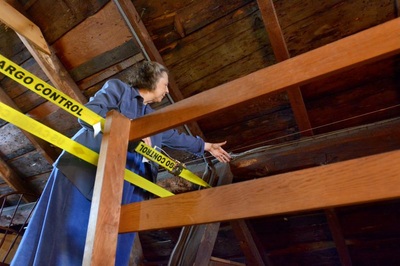 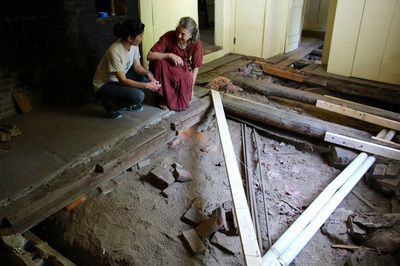 "Nancy did a wonderful job bringing Historic Northampton back to life."
- Ward 3 resident Fred Zimnoch
The Board of Trustees of Historic Northampton celebrates the dedication and success of Nancy Rexford, who served as Acting Director since October, 2014.  She had already been serving as the Treasurer of the museum since 2013.  When the previous part time Director, Nan Wolverton, took a full time position, in October 2014, Nancy offered to take on this position for a year with no recompense.  Working with the essential Marie Panik, the Board of Trustees and multiple volunteers, she accomplished what we had feared was impossible.

As treasurer, Nancy revised our bylaws to make them coherent and legal and undertook a thorough investigation of the museum’s financial history.  Nancy knew all too well how dire our circumstances were and what challenges we faced.  But even she could not have foreseen all the further problems we were to encounter when she began her directorship.

Nearly every week she commuted to Northampton from Danvers, working more than full time to oversee the direction of the museum.  She cleaned out neglected rooms, recognized deteriorating sills, roofs and windows, and secured two large CPA grants for the rehabilitation and restoration of the campus buildings.

With her husband, she donned hazmat suits to strip out the rotting and vermin-infested insulation under the Parsons house first floor.  She insulated heating ducts and filled holes in foundations with steel wool to keep out rats and mice.  She cleaned out years of accumulated dirt and silt in the Shepherd basement and climbed on the Damon roof to find the source of leaks.  Last summer, she initiated the public archeological dig behind Parsons House.  This past year she has spearheaded the founding of the Meadow City Historians, open to all people researching any aspect related to Northampton.  This January, with the help of volunteers, she oversaw the emptying of the front Damon basement, the cleaning and accessioning of all the furniture and materials, the sealing up of the basement from moisture, the installation of high-quality dehumidifiers, and the return of objects in an efficient and organized way.

She re-established relationships with families long associated with the museum and won over new donors impressed with her dedication to the survival of the collections and buildings. Her efforts were directed towards the long-term survival of the museum, building relationships in the city for the development of projects that would make the organization more relevant to a wide audience.

Thanks to Nancy’s efforts and her insistence to cut costs, including any salary for herself, the museum operates today on a balanced budget and has increased its membership from less than 121 to 498 in 14 months.

Rexford had worked at Historic Northampton from 1975 to 1984 as its Curator of costume, later Assistant Director and Registrar.  As she describes her work then, we can see how she applied these same principles and skills over the past two years here:
During this time, she put together research materials that were the basis of her development as the foremost scholar of American women’s dress in the country.  After she moved to Danvers, MA, in the 1980’s, she received two grants from the National Endowment of the Humanities to write what was to be a multi-volume history, Women’s Clothing in America, 1795-1930.  This exceptional volume on shoes was published in 2000 and won the Costume Society of America’s annual prize that year for excellence in scholarship.

Over the past 30 years, she has consulted for over 70 museums and historical societies around the United States, curated multiple exhibits, and published articles, many focused on various approaches to the study of dress history.

This museum is alive and well thanks to Nancy.  All of the Board, members, volunteers and supporters know how determined she has been to save and honor the collections, the houses and the whole history of Northampton.  Thanks to her heroic leadership, we have a sound financial footing and we can continue her work to build Historic Northampton into a community-centered organization.